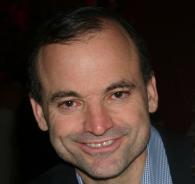 Lou is also a Managing Partner of The Israel Syndicate on AngelList, which invests in shares of tech companies founded by Israelis, regardless of where they’re located. Lou’s Israeli investments include Viewbix, IT Central Station, and Segmanta.

Lou was previously Wall Street’s first private company analyst at Wedbush Securities, where he was the Managing Director of the Private Shares Group. At Wedbush, Lou started the first private shares trading desk on Wall Street. From 2003-2006 Lou was President of Bolt.com, a leading social network which grew to over 20 million uniques. From 2000-2002 Lou was the CEO of The .tv Corporation, an idealab company which licensed the top level domain (.tv) from the tiny island nation of Tuvalu. .tv was acquired by Verisign (Nasdaq:VRSN).

Prior to .tv, Lou had a distinguished career as an equity analyst following media companies for Goldman Sachs and Merrill Lynch. Lou began his career at Bain & Company, where he sat outside of Mitt Romney’s office.

Lou is regularly quoted in social media stories in the WSJ, NY Times and other business publications, in addition to his recurring appearances on CNBC and Bloomberg Television.

Lou has a B.A. from U.C.L.A. and an MBA from The Stanford Graduate School of Business.

I know DeFi is our Netscape moment because it’s scaling, rapidly. Just like Netscape’s browser did. The market is screaming that DeFi has found product-market fit. Total value locked in DeFi is up more than 4X in two months.a

OpenAI is an artificial intelligence research laboratory started in 2015 by Elon Musk, Sam Altman, Peter Thiel, Reid Hoffman, Marc Benioff, and others. OpenAI’s mission statement: Our mission is to ensure that artificial general intelligence benefits all of humanity. The OpenAI Charter describes the principles that guide us as we execute on our mission. While OpenAI is […]

By way of background, I’m a former Goldman Sachs equity analyst. So, IMHO, I appreciate the fundamentals of stock valuation and stock markets. When the markets started rising sharply in April, I wrote “7 Reasons Why The Stock Market Is Going Up While The Economy’s Imploding” to understand what many, including myself, were finding so […]

Whether you’re a tech investor, a tech operator, or just a user of tech, the single most important thing in tech is FAMGA, and the profound implications of their domination of tech value creation.

This will be the iconic image of this moment in time, capturing the juxtaposition of the rocking stock market and the coming recession/depression: Even with the significant market drop, we are still at historically high valuations per The Buffet Index, Warren Buffet’s favorite macro view of market valuation. The Buffet Index is simply total market […]

I grew up believing in American exceptionalism. That the U.S. was better than other nations. That’s what I was taught. When I looked around, that’s what I saw. But among many other lessons, Trump has taught me that the U.S. is a banana republic, just like most other/every other nation in the world. And that actually makes […]

The term Black Swan was coined by Nassim Nicholas Taleb, a finance professor, and former Wall Street quant trader, and was popularized after the meltdown that resulting after the Financial crisis of 2008. Per Investopedia, the definition of a black swan event is: A black swan is an unpredictable event that is beyond what is normally expected […]

TL;DR Summary — I’ll cut to the chase. I believe in karma. And if I’m right, and karma’s a thing, then Mark Zuckerberg risks going down in infamy like other billionaires who built (bad) things that worked till they didn’t. The latest example, the Sackler family, who turned the “opioid crisis” into a household phrase. Once again […]

I’ve been following Facebook since I called Mark Zuckerberg in 2004, a month after launch, and offered to buy the company (I was running Bolt at the time). In March, 2010, I published the first Wall Street style research report on Facebook on Tumblr, with a $100 billion five year price target (it was actively trading in the private […]

As Bitcoin starts to gain the attention of the broader population again, we continue to struggle as an industry to define what Bitcoin is in a way that’s accessible to most people. I recently attended a Bitcoin 101 class taught as part of the grand opening of the awesome Bitcoin Center Miami. It’s a great way to help […]